Amendment of the Brussels I Regulation

On 12 December 2012, the Brussels I Recast Regulation was adopted. It will enter into application on 10 January 2015. Since then, an agreement has also been reached on the Patent Package, consisting of two regulations and the Unified Patent Court (UPC) Agreement, which together will create a system of unitary patent protection in the European Union. Article 89(1) of the UPC Agreement provides that the agreement cannot enter into force prior to the entry into force of amendments to the Brussels I Regulation. In addition to the UPC-related amendments, the situation of the Benelux Court of Justice must also be addressed, as it is the only other court common to several Member States.

-26.7.2013: COM(2013) 554 final:
PROPOSAL for a Regulation of the European Parliament and of the Councilamending Regulation (EU) No 1215/2012 on jurisdiction and the recognition and enforcement of judgments in civil and commercial matters 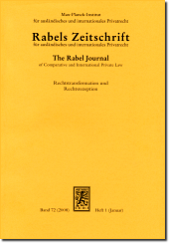 In 2011, the Harvard Law Review held a symposium entitled "The New Private Law". This title was chosen to capture what is allegedly a new stream in US legal scholarship: a group of scholars arguing for the normative distinctiveness of private law and proposing a reconstructive, rather than deconstructive, approach to its traditional concepts. This essay analyses "The New Private Law" from a historical and comparative perspective. It briefly recalls what are presently perceived to be the typical differences between German and American legal scholarship. Afterwards it traces the origins of this divergence, thereby focussing on the decline of doctrinal scholarship and the rise of the critique of private law in the US over the course of the 20th century. Against this background, the essay then examines the program of "The New Private Law" and some of the new theories of private law that are put forward under this heading. While it is too early to refer to "The New Private Law" as a coherent intellectual movement, the essay contends that one can indeed speak of a new mood in American legal thought: a growing dissatisfaction with the established, critical accounts of private law that gives rise to the development of innovative new theories offering constructive reinterpretations of some of its most fundamental concepts. The essay concludes by noting significant differences between "The New Private Law" and present private law scholarship in Germany. In particular, it holds that the first is more ambitious in theoretical terms than most of the latter.

The German Civil Code (Bürgerliches Gesetzbuch – BGB) contains an explicit privilege for private necessity: The owner of a thing may not prevent others from damaging or destroying his property in order to avert actual danger if the threatened harm is unreasonably greater than the damage to the owner's property (§ 904 sentence 1 BGB). He may, however, claim compensation for any damages he incurred (§ 904 sentence 2 BGB). However, the Code does not state who is liable to the owner. If the person who damaged or destroyed the owner's property did not do so to preserve his own legal interest but the interests of someone else, it is unclear whether liability should fall on the actor or on the third person.
Over the past century, courts and commentators have tried to find a principled solution to this problem. Doing so has proven difficult – the owner's claim under § 904 sentence 2 BGB is an exception in German private law. Usually, a person is liable to another only if he or she has done something wrong. In a case of private necessity, however, § 904 sentence 1 BGB allows the property to be sacrificed.
In the United States, the doctrine of private necessity was first established in 1910 in Vincent v. Lake Erie. Until today, the case has been a staple of tort law classes throughout the country, and it has puzzled law professors and legal philosophers alike. Most agree that the case was rightly decided. There is, however, considerable disagreement as to why this is the case. Some but not all of the arguments resemble those brought forward in the discussion surrounding § 904 sentence 2 BGB.
The article examines both the debates in Germany and in the United States, including historical arguments advanced on either side of the Atlantic. It shows that some of the theories which feature prominently in the United States could serve to enrich the discussion in Germany. This is true even though American scholars pay very little attention to the question of who should be liable to the owner. Indeed, the Restatement (Second) of Torts holds a different person liable than the Restatement (Third) of Restitution and Unjust Enrichment, a fact which so far has received little attention.

The principle of private autonomy has reached European conflict of laws in divorce matters with Regulation (EU) No. 1259/2010 (Rome III). This is relevant due to the degree of cross-border family matters, the persistently high divorce rates and the considerable differences as to the substantive laws that continue to exist. This article addresses the motives behind the movement to party autonomy, but above all it considers a need for clarification that should not be underestimated.
Due to the objective connecting factor, courts will apply the lex fori more frequently. In the absence of a choice of law, Art. 8 Rome III Regulation declares applicable the law of the common habitual residence or in certain circumstances that of the last common residence of the spouses. This is owing to the integration effect intended by the Regulation but is also due to the advantages of the lex fori approach, which approximates English law. However, it is doubtful whether the lex fori always meets the interests of the parties as the principle of habitual residence (resulting in a simultaneous departure from the quite strict citizenship principle) creates some uncertainty. These ambiguities can be overcome by the parties' primary right to choose the law under Art. 5 Rome III Regulation. In that way, the continuity needs of the parties can be accommodated.
The principle of free choice of law contained in the Regulation is an important component of the international private law of the European Union even though Rome III applies only to participating Member States. In addition, surprisingly, many questions remain open. Some are answered as follows. The Regulation is relevant not only for judicial or administrative decisions, but also for private divorces. That the Regulation applies, in principle, to same-sex marriages also seems compelling, though the assessment of the question is left to national law (see Art. 13 Rome III Regulation). It is disputed whether under Art. 5(1)(d) Rome III Regulation the law of the forum can also be chosen abstractly. This is affirmed here so long as the spouses have informed themselves to a sufficient and specific degree and have narrowed down the electable states – and the state in question belongs to that group. The choice of law by people with multiple citizenship is not limited to the effective citizenship even if that is prescribed by national law. From the requirement of the Regulation that a choice of law shall not prejudice the rights and equality of the spouses, it is derived that national courts are under an obligation to review the content in the context of Art. 6 Rome III Regulation. The article also emphasizes the importance of Art. 10 Rome III Regulation, which is ideal for resolving gender discrimination issues such as those arising under Islamic law.

This study challenges paradigms in the area of EU antitrust law. In contrast to the prevailing opinion it draws the conclusion that the legal acts (the decisions) of the cartel authorities of the EU member states ought to be qualified as transnational administrative acts which are issued under the authority of the EU within the application of European law.
Specifically, this concerns the question whether the cartel authority of one EU member state may decide on anti-competitive behaviour in the same manner as, for example, the European Commission would decide on it, i.e., with direct effects including the obligation to execute such decisions on the territory of all member states. The predominant view is that a decision of a national cartel authority does not have direct effects on the territory of other member states. Especially in private international law literature it is argued that even within the framework of the EU, the principles of territoriality and limitation of administrative acts apply and that therefore such decisions are limited to the territory of the member state in which they were issued. This shows that even the existence of the EU has not led to a change in traditional opinions. In practice, however, this leads to seriously inappropriate phenomena, including, for example, additional costs for parallel proceedings in practically the same matters in several member states. In view of administrative sanctions this may also violate one of the basic principles of human rights: ne bis in idem.
According to this study, already de lege lata in all EU member states the effects of transnational acts are fundamentally the same as they are within the jurisdiction in which they are issued. Such an act binds every affected party, including all state authorities of the member states. Its validity is based on the principle of the recognition of all national legal systems within the EU. Despite the non-existence of an explicit provision, from the purpose and certain principles of European law one may construe a general obligation to respect the effects of the so-called European Transnational Act. However, any such act must comply with the basic principles of EU law, and especially it must not be in conflict with basic procedural rights. De lege ferenda it appears necessary to change Regulation 1/2003 in order to clarify the legal regime.